A proposal for a high-voltage power line carrying wind energy across the Midwest has received a jolt of new life after the Missouri Supreme Court ruled that regulators wrongly rejected it. 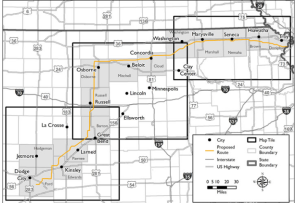 The court ruling Tuesday means that Missouri must re-evaluate whether Clean Line Energy Partners deserve approval for a $2.3 billion project that would build one of the longest electric transmission lines in the U.S.

Plans call for the line to run from wind farms in western Kansas across Missouri and Illinois before hooking into a power grid in Indiana that serves the eastern U.S.

The line would run from Dodge City to Great Bend, then move north through Russell and near Osbore before working its way east through northern Osborne and Mitchell County to Concordia before making its way northeast to Marsville and alone Hwy. 36 to the state line, through Missouri and and eventually to Indianapolis.

Clean Line has been working on the so-called Grain Belt Express power line since 2010 but hasn’t been able to start construction because of regulatory hurdles.