Kansas received a passing grade for its highways  when the state’s chapter of the American Society of Civil Engineers released its latest “infrastructure report card.” 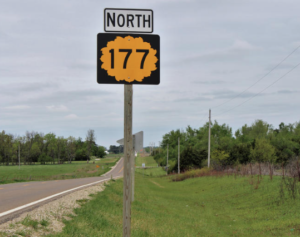 Kansas highways received a C- on their report card from the American Society of Civil Engineers. ASCE points to funding cuts for the decrease in quality.
JIM MCLEAN / KANSAS NEWS SERVICE

However, the engineers also warned that sweeping cuts to Kansas Department of Transportation funding are still causing roadways to suffer.

Kansas earned a C on the report card, which ranks the quality of state infrastructure in nine categories, such as bridges, roads, energy and drinking water. This is up from a C- in 2013, the last time the Kansas ASCE chapter released a report card. And while some areas, such as levees and bridges, increased in quality roads went down.

Over several years, lawmakers have diverted more than $2 billion from KDOT to fill deep holes in the Kansas budget. The cuts dipped into funds for T-WORKS — a 10-year, $8 billion program for projects to preserve and update highway infrastructure across the state.

The state has been addressing its backlog of projects. As of now, 23 highway projects costing $600 million are still delayed, down from as many as 50 in 2017. This comes as the Kansas legislature recently approved the creation of a highway task force that will examine the impact of the cuts, among other things.

When cuts were proposed in 2016, then-Gov. Sam Brownback and KDOT Secretary Richard Carlson said the state’s history of investing in its highway system would keep at bay the effects of a few years of reduced maintenance. But both the report card and stakeholders say otherwise.

Michael White, executive director of the Kansas Contractors Association, said that not investing in regular maintenance will end up costing more in the long run, as invisible damage beneath the surface builds up. He says that damage is happening now.

One road that some Kansans point to as particularly dangerous is Highway 177 that runs through the Flint Hills from El Dorado to Manhattan. The narrow highway has been the scene of multiple rollover accidents, and was supposed to get a safety upgrade under T-WORKS. But, the funding cuts landed this project on the list of those suspended.

Outside of roads, the report also indicated that some dams in Kansas are especially at risk to be dangerous. Just under 500 of the state’s 6,400 dams were classified as a potential high or significant hazard, meaning if they failed it could cause “significant loss of life and property.”

“I would caution folks not to get too overly excited about the report because there’s still a lot of work to be done with roads,” White said. “When you don’t maintain the surface like you need to because of lack of funding … ultimately (you’re) spending more dollars to replace roads that you wouldn’t have if you’d just preserved it.”

He added that the state needs about $400 million for annual maintenance to preserve the system, but current funding is still falling short of that mark, even though the legislature has restored some funding. The 2019 fiscal year’s budget contains $59 million more than last year’s, which only allocated $44 million toward annual maintenance.

Sheryl Gallagher, president of Kansas’ ASCE, says the state’s highways were once among the best in the nation. Now, she says, roadways are an area of “particular concern” in Kansas. She urged lawmakers to find a way to channel funds back into T-WORKS to follow through on projects.

Laurie Arellano, director of communications for KDOT, pointed to the funding increase and the task force as a path forward for improving the roads. She said the funds will help KDOT move beyond preservation and toward modernization and expansion projects.

Each state’s ASCE chapter releases report cards, which are then compiled into an overall grade for the nation at the end of the year. Missouri’s report card was released in April, giving the state a C-minus grade overall grade and a D-plus for roads specifically.

Derek Nesterhttps://sunflowerstateradio.com
Derek Nester was born and raised in Blue Rapids and graduated from Valley Heights High School in 2000. He attended Cowley College in Arkansas City and Johnson County Community College in Overland Park studying Journalism & Media Communications. In 2002 Derek joined Taylor Communications, Inc. in Salina, Kansas working in digital media for 550 AM KFRM and 100.9 FM KCLY. Following that stop, he joined Dierking Communications, Inc. stations KNDY AM & FM as a board operator and fill-in sports play-by-play announcer. Starting in 2005 Derek joined the Kansas City Chiefs Radio Network as a Studio Coordinator at 101 The Fox in Kansas City, a role he would serve for 15 years culminating in the Super Bowl LIV Championship game broadcast. In 2020 he moved to Audacy, formerly known as Entercom Communications, Inc. and 106.5 The Wolf and 610 Sports Radio, the new flagship stations of the Kansas City Chiefs Radio Network, the largest radio network in the NFL. Through all of this, Derek continues to serve as the Digital Media Director for Sunflower State Radio, the digital and social media operations of Dierking Communications, Inc. and the 6 radio stations it owns and operates across Kansas.