Kansas Secretary of State Kris Kobach will not represent himself during the appeal of a voting rights case in which he was ordered to undergo more legal education and was twice found in contempt of court. 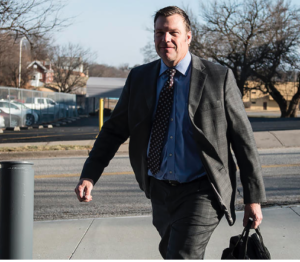 Kansas Secretary of State Kris Kobach outside a federal courthouse during a trial over his handling of voter registration earlier this year.
FILE PHOTO / Kansas News Service

Instead, the attorney general’s office will handle the case. Solicitor General Toby Crouse filed Kansas’ appeal this past week of a federal judge’s ruling that the state cannot require documentary proof of U.S. citizenship to register to vote. The judge found such laws violate the constitutional right to vote in a major setback for Kobach, a Republican who is running for governor. Kobach has long championed restrictive voting laws and led President Donald Trump’s now-defunct voter fraud commission.

Micah Kubic, executive director of the American Civil Liberties Union of Kansas, said the change in legal representation won’t have much of an effect on the appeal because “even a good lawyer with a bad case still has a bad case.” The ACLU had filed one of the lawsuits challenging the proof-of-citizenship law.

“A good lawyer who is defending something that is illegal, unconstitutional and wrong is still going to lose on the merits regardless of how technically skilled they might be,” Kubic said. “So despite the fact that there were clear issues with procedure and the way in which Secretary Kobach handled the trial, at the end of the day that is not what the decision is based on. At the end of the day, the judge struck down the law because it is illegal under federal law, unconstitutional and contrary to the values we share as Americans.”

Kansas Gov. Jeff Colyer said he supports the appeal. Asked about the significance of Attorney General Derek Schmidt’s office handling it instead of Kobach, Colyer said: “I think the attorney general will do a fine job, and I intend to win this. I think it’s an opportunity for us to win this thing.”

Kobach spokeswoman Danedri Herbert downplayed the significance of the move, saying that had always been the plan for when the case reached the appellate level.

“Secretary Kobach and Attorney General Schmidt have met and spoken about the case and they have agreed that the attorney general’s office handle the case with the full support and assistance of the secretary of state,” Hebert said.

The attorney general’s office said in an email that it is committed to “vigorously defending” the constitutionality of the law.

Former U.S. Attorney Barry Grissom said the change in legal representation won’t make much difference because the appeals court will only review the facts as laid out at trial.

U.S. District Judge Julie Robinson’s decision last month came in two consolidated cases challenging a Kansas voter registration law requiring people to provide documents such as a birth certificate, U.S. passport or naturalization papers. Along with throwing out the law, she also ordered that Kobach complete an additional six hours of legal education on top of other requirements before he can renew his law license for the upcoming year. She imposed the sanction for his numerous disclosure violations.

She had already held him in contempt earlier for not fully registering voters as she had initially ordered. A previous contempt ruling dealt with evidence he had misrepresented to the court.